I’ve been in many houses in my lifetime. Nowhere near every house, not even most of the houses, but enough that I can say I have never seen, in real life, a moderate sized house that has stairs in the living room and another set in the kitchen, both leading to an upper floor. Yet this pops up quite often on sitcoms. Like “Full House,” “Boy Meets World,” “Family Matters,” “Step By Step,” “The Cosby Show,” “8 Simple Rules,” that last one is confusing because their kitchen isn’t even closed off. There’s two stairways like 8 feet away from each other with nothing more than a couch between them. Yes, I know I probably spend far too much time thinking about sitcom architecture, but someone has to! Otherwise we end up with a hotel in Barbados that’s make no goddamned sense. Where did that bathroom in Joey’s room go? I’ll spend the weekend agonizing over this, you spend it having fun, or reading the internet.

Here’s what I know about me: to strangers I’m fairly polite. To people I know, I’m a straight up jerk. I don’t think there is argument there. You’re absolutely welcomed to ask anyone and I’m sure they’ll tell you I am a jerk. Especially former co-workers. It’s important to be self-aware of one’s own level of jerkiness. There is always the possibility too that I think better of myself. I may very well be more of a jerk than I believe. So does that make me more of a jerk for thinking I’m less of a jerk than I am? Is this the famous jerk paradox? Is there a famous jerk paradox? Are you tired of the word “jerk?” I am.

Let me tell you about my new favorite record label, Polyvinyl. I have only heard two bands on their label, one of which is a band I heard for the first time this summer and fell in love with them overnight. That band is Beach Slang. A hard rocking band who remind me there is always solace to be found in rock and roll. But Polyvinyl won me over when I did the pre-order for the new Beach Slang record. The vinyl arrived and when I opened the package I was greeted by a couple of stickers, a Polyvinyl button, and an orange Air-Head candy. I’m very easy to win over. Just include free candy with whatever you’re giving me. I may just order another record to get more candy. Sure, I could just go across the street and buy another Air-Head, but where the hell is the fun in that? Here’s a tidbit about me too, when it comes to fruit flavored candy, orange is my favorite. So to recap, check out Beach Slang and send orange candy my way. Thank you.

The office I used to work at was right next door to a bbq restaurant, and if you stepped outside at just the right time, like right before the lunch or dinner rush, then you were treated to the air filled with the delicious aroma of smoked and grilled meat. It was awesome, especially since there was a good chance some dickweed (I’m talking about you Richard!) stunk up the office by microwaving canned tuna fish (he would just dump it in a bowl, gross juice and all, and throw that shits in the microwave for like 2 minutes and the whole floor reeked the rest of the day). But apparently to some, bbq smells are just as bad as microwaved tuna smells and warrant a complaint call to the city.

There is this wonderful place in Denver called Rooster and Moon. I wish I could say I went there more. And it’s not because I didn’t like it or didn’t want to, but more because I’m somewhat of a hermit. A loner, Dottie, a rebel. I’ve also had the pleasure to meet one of the owners and he couldn’t be any nicer and one of the best dudes. I would even say he was my favorite episode of the Jon of All Trades podcast. But now he has decided to seek out the next adventure which means Rooster and Moon will shuttering its doors. I’m sad to see it go, and wish I had more to say about it. Luckily, Jon Eks has written this loving piece to Rooster and Moon. I wish all the best to everyone involved with the shop and I know they will crush whatever is next.

Sometimes I come across an article that makes me think I am doing my blog all wrong. I need to do more listicles about food. The sort of articles where I can get I eat a bunch of, I dunno, chicken wings, or Hot Pockets, or canned dog food. Wait, not that last one, how about Dairy Queen Blizzards. Yeah I could rank those. Who am I kidding? I am far too biased to make a proper list. Number 19 would be Oreo, and 18 through 1 would be Reese’s Peanut Butter Cup. But if you want your Blizzards ranked using multiple people and some scientific metric, then go elsewhere. I stand firm by belief in the winning combination of ice cream, chocolate, and peanut butter.

I love oral histories. I think that has become obvious. What better way to learn about a thing then hearing first hand experiences of said thing? So I will continue to push them on you. Because it’s my blog and I’ll do what I want! Also, as noted above, I am a jerk. This installment of oral history corner takes a look at a classic 80’s cartoon. 80’s kids know, and knowing is half the battle! They mention some great progressive things the show did, but I’m sad they didn’t talk about Sgt. Slaughter becoming part of the team. I remember renting one of the Bill and Ted movies when I was younger and it advertise the tape also included a music video from Slaughter. I was upset and confused when it had nothing to do with Sgt. Slaughter. My younger knowledge was linked almost entirely to pro wrestling. Pro wrestling and super heroes. Much like my adult life. Oh, and the director of the 80’s “G.I. Joe” cartoon killed Orson Welles.

It is officially autumn, so here’s your pumpkin spice tattoo. 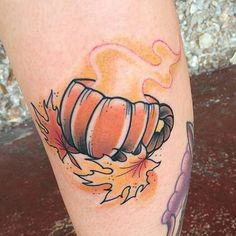 Drink it in, bitches. Happy Friday!