The new Ben Affleck Batman movie reveled its title this week and people of the internet are not happy. But what else is new? I’m really starting to believe people just want to complain about every move the DCEU makes. There’s nothing wrong with the name The Batman. There was a Batman cartoon that ran for 5 seasons with that title. I prefer the shorter, more succinct titles. Batman v Superman: Dawn of Justice is a mouthful of unnecessary nonsense. Batman and The Dark Knight are the best titles you could have used, so everything else is a step down anyway. I’m also a fan of not using sub-titles, the exceptions being rhymes or whatever you call that thing that Die Harder did. The name’s fine, and I look forward to The Batman. Now on with The Happy Friday.

This Happy Friday is actually a bit difference. I should apologize now for misleading you. I’m actually writing this to inform you on a few changes happening around here. I recently started a new job. I am now a special education paraprofessional. It’s fantastic. I’ll get into that a little more, later. But the past couple of weeks I have been on a special assignment where my time has been fully devoted to one troublesome 1st grader. Many of you are parents and know how hard it can be to handle your kids. But your kids are pretty good, mostly, (at least as far as I know). You have also had several years of experience leading up to them being 6 years old. I was given a problem six year old after a week. To say I am exhausted is an understatement. That, along with not being able to surf the net for a big chunk of the day means I need to put Happy Friday on a hiatus. I don’t know how long this hiatus will be, but I know I currently won’t be able to deliver a product I would want to share with you. Maybe it’s a winter and summer break kind of article feature.

As for the lack of other articles, I have a few in the cooker that should see the light of day over the next couple of weeks. But I know I have a few readers who look forward to the collection of links known as Happy Friday and wanted to update everyone the status of that. I apologize, but I want to ensure I deliver what you have come to expect. So to recap: new articles on the way, Happy Friday on hiatus, and here’s Donatello. 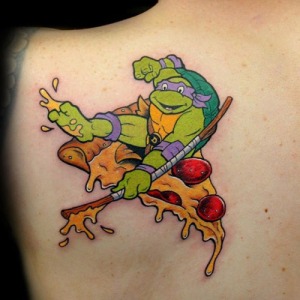