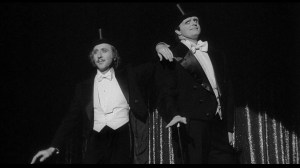 It’s one of my favorite days of the year. The Rocky Mountain Showdown. Usually the start of the season where I spend time eating food in a parking lot much like a vagabond, then go watch a bunch dudes chase a ball. On paper it appears ridiculous, in practice it is. But it’s a bunch of fun and a great reason to see friends who I don’t get to see too often. I wouldn’t change a thing about it. So every year, when Labor Day rolls around, I start to feel the excitement and anticipation of spending the next few months with the tailgate posse cheering on the Rams. It’s better than a day home with a McChicken. So let’s flip the coin and kick this thing off!

Remember in Tommy Boy when they pose as flight attendants (a clear sign it was made before 2001) and David Spade is doing the safety spiel and while talking about seat belts mentions if you don’t know how to use one then ring your call button and my friend will come hit you with a tack hammer because you are a retard. Despite your familiarity with seat belts, there’s a good chance you’ve never attempted to use one in an emergency situation. You’re in a panic because you’ve plummeted 30,000 feet and need to escape before the fuel explodes. You’re freaking out, trying to escape, and suddenly there’s this seat belt that’s different from the one in your car. But you just had that refresher course so blamo you’re free and able to slide down that inflatable slide to safety. Or to some deserted island with polar bears and smoke monsters. David Spade shouldn’t have been such a dick about seat belts is my point. Whoa, wait, that island on “Lost,” was that purgatory? Holy crap, I just got that. I guess the seat belt thing didn’t matter for them.

Recently some ass wagon “pick-up artist” made a blog post about how to talk to women wearing headphones. Having only read the gist of it, I can say it’s idiotic. Others on the internet agreed and offered their own tips, like, “Don’t. Leave her alone.” We are at a high point in head phone use and part of why people wear them is because they want to be left the fuck alone. It’s not the only reason, but it’s one that applies. It is kind of amazing that between head phones and Pokémon Go we can go out in the world without actually being out in the world. But I’m not editorialize, it beats those jerks that make everyone in the area listen to whatever they’re listening to.

When it comes to fighting about waffles there are three rules to keep in mind. First, never get into such a fight with Leslie Knope as she is a die-hard waffle fanatic and will mess you up, then bury you in a park where you will never be found. Two, also avoid getting in one with Eleven, she loves her Eggos and she has powers. Powers that can flip a fan over her head (#spoilers). And finally, don’t do it at the America’s Best Value Inn of the Pere Marquette Township, MI. Because you’ll just get the all of the hotel guests kicked out and they’ll be crazy angry with you. Just have some chill about your waffle, after all, you are about eat delicious waffles.

If you have ever watched “Bar Rescue” then you know Jon Taffer will bring in a highly regarded cook and bartender. They show of their mad skills while teaching the staff how to not suck at their jobs. It seems as though Chili’s does the same thing. Only the cooks and bartenders are from Chili’s, learn the Chili’s way, and then train others at different Chili’s. So it’s exactly the same. I imagined this training meeting like a scene from Glengarry Glen Ross, or a pre-game locker room, but kind of sad. Though it seems people really like working at Chili’s, so bully for them. I will say it does make it nice when you go to a Chili’s at get people who seem genuinely happy.

There’s a commercial, for Geico I believe, with pirates and the one pirate’s bird is ratting him out. Because that’s what parrots do I think is the point. There are a many Geico commercials so I could be wrong on what they’re implying. Basically parrots will say anything they have heard, like a god damned toddler who has no chill, and for that reason they may become evidence in court cases, parrots not toddlers. My bird would be completely useless as it would probably just repeat cartoons, stuff about hockey, and just end everything with MAGGLE! Most people reading this are now asking what the hell is MAGGLE? Ask John Layfield.

I know this goofy dude who regularly gets perms. He has no shame about it, and actually has excitement leading up to the procedure, do you call this sort of thing a procedure? Basically he won’t shut up about it on Facebook. I didn’t fully understand it until I read this. Yes, that happy little fro that drew us in started as a cost saving measure and eventually Bob grew to hate it. But like a finished painting, it was there to stay. The happy little bush atop his head

One of the main tenets of improv is it’s okay to fail. Falling flat on your face, metaphorically and literally, happens, get over it. If you want more evidence here are several products that failed spectacularly bad. Like pants shittingly bad. But you’ll notice in the long run all the companies behind these failures are doing just fine. And apparently Crystal Pepsi is back (90’s kids remember), so maybe the real idea is to try again 20 years later. Unless the product involves olestra. Don’t try that again, just blow that right out your ass.

Or you could try marketing your failing product to horny teenagers by starting a rumor it will lower your sperm count. I’m sure there are many of us who have heard such a rumor about Mountain Dew. What I wasn’t aware of is how much steam this rumor picked up and how our 24 hour news cycle culture forced science to intervene. Turns out the rumor we heard from some kid on a school bus is not true. Shocking, I know! But some people do trust such sources, many now work for Fox News (hiyoooo!) and some had unplanned pregnancies because their choice of birth control was a six-pack of the Dew. That’ll be a fun story to tell their son, little Code Red.

Oh, hey, I participated in the 48 Hour Film Project again. And like last year our film has been selected for the Best Of Screening. I always have fun making these movies and watching them on the big screen so I am excited to do that again and it’s always exciting when others like what we have made as well. You should come to the Esquire on September 15 and see what all the fuss is about. Need more enticement? One of the film involves a bunch of naked people.

Gene Wilder has become the latest victim of 2016’s murder spree. With staring roles in Mel Brooks’s best movies and of course the real Willy Wonka (suck it Depp) Wilder played a part in my young movie watching experiences. There’s not much else I have to say that hasn’t been said already. But I want to link to the statement from Wilder’s nephew explaining Gene’s desire to keep his health issues hidden from children so that they only saw a healthy Willy Wonka. “He simply couldn’t bear the idea of one less smile in the world.” So I raise an everlasting gobstopper to comic genius and one of the good ones. Rest in power, Dr. Fronkentein.

Alright, it’s time to tailgate and enjoy some hotdogs. This guy gets it.