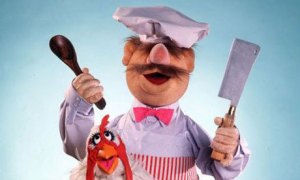 Recently my friend Adam compliment a buffalo chicken dip I made and I asked if I ever considered culinary school. Although, that could have been an insult. “Think your cooking is good? Wrong! Go to school, get some training! Betty Crocker? More like…you suck!” I don’t actually think that. It was very complimentary in tone, plus the part when he said the food was good. But I have this thing, self-doubt the professionals call it, where I question these sort of compliments, usually.

It was a very kind thing for him to say. And I have considered culinary school, in abstract sort of way, like oh that might be a good thing, but am I culinary school person? Then I get distracted by something and life goes on. But since he has said that I’ve thought about it more and have started some initial research. What’s a little more school loan debt? Though this would be something that could result in a job to pay off such debt. More so than a super generic psychology degree.

This is not the first time someone has said the food I have made is good. Usually I just chalk it up to people being polite. I know what I cook isn’t disgusting, at least not what I share with people. The gross things are usually experiments that I quickly realize should never touch another tongue. So I take it as thanks for not making us barf. The one nice things about self-doubt is it allows you to be humble.

It’s actually really nice to know that people are enjoying the food I make. I approach cooking the way I wish I approached more creative endeavors. I make the things I like and would want to eat. The fact that others like it is just (eyes darting back and forth) icing on the cake. It also means I have good taste.

The positive reactions, from both friends and my own taste buds, is wonderful because I love cooking. It’s an activity I engage in where the only thing I’m thinking about is the cooking and the food. All other problems and issues are (eyes dart again) on the back burner. I’m thinking about what I need to add, how long the sauce has been simmering, if I need to chop more onions. I think about the amount of onions I have chopped as much as I think about comic book movies. I also have opinions now about which kind of onion I should use depending on what I’m making. When cooking, thinking about other things can be disastrous to the dish.

It’s funny. I never really thought about why I enjoyed cooking. I figured it was the simple reason of I like food, food tastes good. Or that cliché of if tastes better when you make it yourself. But apparently it’s deeper than that. It’s just another reminder of how great and important being able to create something is to me. I think maybe I will consider culinary school more seriously. Until then, invite me to any potlucks you’re throwing. I’ll bring something tasty. 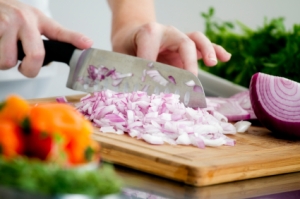