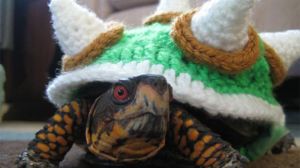 Kimmy Schmidt, among other people, thinks it’s weird that it’s called “Mario Brothers,” essentially making them Mario Mario and Luigi Mario. In a world with a Princess Peach, a short dude wearing a mushroom cap calling himself Toadstool, walking mushroom monsters, some kind of turtle-duck hybrid things that shouldn’t be, plants that shoot fire, and an anthropomorphic turtle-dragon running a land full of castles, I hardly think the name Mario Mario is the weirdest thing going on. No real point to this. Just wanted everyone to think about how weird that entire world is and how we never give it a second thought. It’s a good life philosophy: don’t question the obstacles, just chase the goal. Today’s goal is to read internet articles. Don’t let work obstacles get in the way.

Scrolling FaceBook the other day I noticed a BuzzFeed article, I don’t remember the title exactly but it was something along the lines of “15 Reasons Why People Who Don’t Eat the Pizza Crust Need to Be Stopped Because They Are Worse Than Nazis.” Ok, so maybe I’m a little off on that title, but it was essentially food shaming people who don’t eat the crust. I got overly angry because I am so sick of this shit. If someone doesn’t want to or doesn’t like to eat some food item that shouldn’t be your god damned concern. It’s their taste buds, stomach, and life. Let them enjoy it how they want. The only way them not eating pizza crust affects you is in the stupid made up way you just let it affect you. It stands there’s a big disconnect between the food we talk about and the food we actually make and eat anyway. So let’s maybe cool the jets on all the food shaming because we all have different tastes.

Go ahead and mix yourself a sexy alligator (somehow not from the world of Mario) because we are about to talk beards. For whatever reason, beards are as popular as ever right now. But have you ever wondered what the evolutionary significance of them are? There’s no consensus about people who are attracted to beards. And the link with testosterone is debatable. And while Grizzly Adams may have earned his by wrestling bears, that certainly isn’t the case with most of the modern beards. Apparently, they probably have something to do with establishing dominance, along with deep voices. I grew my beard to hide a second chin and because my mutton chops were no longer acceptable, or ever acceptable.

Sometimes I walk to my local grocery store. This is not bragging because it is not a far walk. Driving there is not really that much quicker on account of the indirectness of the roads, and navigating a car in that parking lot is stupid. Yet there are still days when I think this walk is too much. Then I read this about a dude on a decade long walk around the world and realized I am a ridiculous wuss. I watched that movie Wild and wondered if I would be able to do that trek along the west coast of the US. The answer is probably no. So to think about doing that around the world is a definite no. He started in Africa, has crossed the Middle East, and is in central Asia at the moment. There is a whole bunch of nope involved in all of that. But I got to give him props for not questioning the obstacles and just chasing the goal. The very weird goal. And hey, he’s already doing better than that hitchhiking robot. But we’ll see how this dude does when he gets to Philly.

Dwayne “The Rock” Johnson has a new app. Because that’s what we do now, we have celebrity apps. If there’s a way to put someone’s name and/or face on a product, then by gum, we’re going to do it. This particular app is an alarm and goal motivator. I went ahead and downloaded it. It tells you to get up so you can work on achieving your goal. To help you get up it forgoes the normal alarm sounds and gives you options like a shredding guitar solo, or a chainsaw, or explosions. And if that’s too much for you, there’s milder sounds accompanied by The Rock calling you a jabroni. And there is no snooze option, because you do not tell The Rock you need just five more minutes. There’s also a premium feature. For a few dollars, The Rock will take your phone, shine it up real nice, turn that son bitch sideways and stick it straight up your candy ass! IF YA SMEEEEELLLLLLLLLLL, WHAT THE ROCK, IS COOKING!

The Kentucky Derby is tomorrow, but you knew that because it’s the Kentucky Derby. As of press time, the favorite to win is a horse named after a Detroit Red Wings hockey player. In all of sports, I hate that team the most, so by association I hate that horse. If I had the resources, I would take a page out of Katie Nolan’s book (this is some of the best trolling) and name a horse, to race against this one, Claude Lemieux. Detroit hockey fans hate that dude. But the Derby is about much more than horses with terrible names. It’s also about mint juleps, and giant ass hats (which are not hats worn on the ass), and of course Joey Fatone. Everyone take a drink when he shows up on TV, this includes the Progressive commercial he’s in.

I started this article with a very angry rant, which has kept my blood boiling. So I want to end with some goofiness. Because let’s face it, the weekend is all about stupid, funny, fun. Cracked will periodically give us a post of hidden comedy gems on YouTube. This is their most recent entry into that collection. It’s a nice reminder to not take shit so seriously. If you don’t find and least a few of them just hilarious, then you may be dead inside. And I’m not sure I can help you. Though I would like to try, say Wednesday nights, May 11, 18, 25, or June 1. Around 7:30 pm, at the Bovine Metropolis Theater, 1527 Champ St, Denver CO. If you haven’t caught on, this is now the plug for my improv class graduation show. Class 77 brings you “The Only Show That Matters.” Tickets can be bought online for $10, or at the theater for $12. I encourage the early online purchase, especially if you’re thinking about the later shows, past grad shows always sell out the final two performances. But come support me, local art, and a local business. Or stay home and lick the cat’s butt. It’s your life.

In honor of the Derby, I sought to find a horse tattoo. Then I stumbled on this gem. 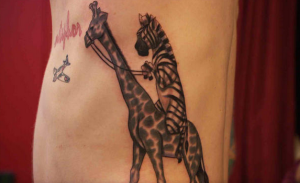 I couldn’t pass it up.