There’s a live action version of Beauty and the Beast on its way. And we just saw a live action The Jungle Book. I have nothing against these, I even saw The Jungle Book and quite enjoyed it (Sam Raimi has a voice cameo) but I think it’s time to use this technology and characters for what we really want: live action TaleSpin. Then we can tackle the rest of the Disney Afternoon, Ducktales, Gummi Bears, Chip and Dale’s Rescue Rangers, and Darkwing Duck. There is no better time than right now for a Darkwing Duck movie. I’ll be writing a letter to Hollywood this weekend, that’s who I write to right? But first it’s time for some Friday time wasters. So let’s. get. dangerous.

Here’s something you probably don’t know about me, in like 1995 or so, I had a massive crush on Nicole Sullivan. I was introduced to her, like most people, via a new sketch TV show called MADtv. It was a TV  show based on MAD Magazine, but not really, but kind of, but not really.While not one of my favorite sketch shows, I watched on occasion and it did produce many of my current favorite funny people. After reading this, I’m happy to learn it had some writers from one of my all-time favorite sketch shows, Kids in the Hall. So maybe I owe MADtv another watch. But instead I’ll probably just re-watch Key and Peele or Patton Oswalt stand-up specials.

There’s this house I pass on my daily walk that I often think would be good for this restaurant idea I have. I haven’t actually seen the inside. But from the outside it seems like it would be a good size, and it’s in a good location. It’s always neat when things are in buildings that aren’t quite what you expect them in. Like a bed and breakfast in an old school-house, a brewery in a slide factory, or a 5 star eatery in a prison. Not so much an old abandoned prison, but one still fully functional and in use as a prison. Oh, and the chefs and wait staff are all prisoners. And most of the ingredients come from a farm at the nearby women’s prison. I had to check several times to make sure I wasn’t reading an Onion article.

If I had to guess what the favorite book of the internet would be, based on my experience with said internet, I would say Harry Potter, Atlas Shrugged, or Highlights for Children. The real answer has elements of all three of those, but is actually entertaining. I do find it troubling a One Direction book cracked the top 15. It just strengthens the argument that the worst people are found on the internet. And that people with actual taste in books would rather be reading books than rating books on some website.

Remember Magic Eyes? The 3D art that helps date the movie Mallrats and that one episode of “Seinfeld?” Well, it’s back! In pog form, or gif form. Ok, so only one is a gif, and one is a full length music video. Both of which I find super relaxing and could watch for hours. But what’s the point of putting Magic Eye pictures on the internet without updating them? I think I’m supposed to warn you that one of them is NSFW, but they’re hidden pictures. I’m not sure how that works. I guess there is one that is potentially NSFW. Also, I’m curious how many of you cannot see the hidden images. Let me know, for research, not so I may lord my superior eyes over you.

They always say, “Listen to your gut.” It’s supposed to know what’s best, like an intuition or something. But probably it’s just gas. I tried really hard not to make a fart joke while writing about guts (but one squeezed out). I failed, but only slightly since I did keep it pretty mild. Farts, jokes, and fart jokes aside, your gut plays a role in your mood. Which makes total sense. How often have you been in a bad mood when your guts have been all funked up? Apparently this is a bit more complex than that. With talk of probiotics and other biology that was lost on me. The take away I got (or made up) is there are foods that the gut really likes which will change your mood thus making them happy foods. Which sounds delightful and I’ll take an order of that.

Maybe you don’t give a damn about your gut and will bombard it with heaps of crap. That’s fine. It’s your life, you do you. If that is the case, then may I recommend taking advantage of all-you-can-eat-buffets. Oobah Butler has some tips to get the most from these establishments. The last time I was at one of these places was in Las Vegas and it was the begging of the end. I wound up crazy sick and while everyone else was out partying with Willie Nelson, I was lying uncomfortably in my hotel bed questioning all my life choices. So I avoid all-you-can-eat-buffets. I stick to the tried and true self-hate meal of Taco Bell.

Some people watch cartoons and think, “I want to be a drawer. Not like desk drawer or junk drawer, but one who draws.” While some think, “heh heh, the duck’s bill got shot off.” Then there’s a few who are inspired by cartoons, specifically Bugs Bunny and Elmer Fudd cartoons, to become opera singers. Inspiring a generation of opera singers, teaming with Michael Jordan to save the planet via a basketball game, and forcing Garth Algar to question his sexuality, is there anything Bugs Bunny can’t do? That may have seemed rhetorical, but one thing he can’t do is get out smarted by Daffy Duck or the Tasmanian Devil.

From classic WB cartoons, to a more modern one. I remember watching ­Goodfellas for the first time and thinking it was very much like those pigeons from Animaniacs. I would eventually learn why that was. This was a great moment for me as I realized the more I knew, the more I would enjoy jokes. Animaniacs was designed to reward those who know more, as shown in this great pitch meeting for the show. Which is also a great example of trying to explain your unique idea to non-creative types. As well as explaining why you feel unmoored when you watch the cartoon.

I’ve put this in the last few Friday posts, so you knew it was coming. Your last chance to see The Only Show That Matters is this upcoming Wednesday at 7:30. If the offer of entertainment and an excuse to get out of your house isn’t enough to entice you, then I have to play the ace up my sleeve. There will be free pizza (maybe some beers. I can guarantee the pizza, but not the beers) for anyone in the audience following the performance. So come down to the Bovine and laugh, cheer, and have some pizza. And for those of you who have seen the show, thanks so much for coming. It means a lot to me. You’re awesome! But feel free to come again as it will be a different show!

“Pinky, are you pondering what I’m pondering?” 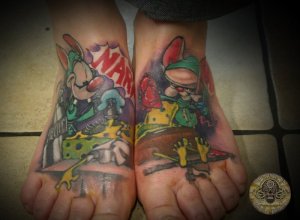 “Gee, I doubt it, Brain. For I am one of whimsy and my thoughts usually demonstrate this. While you’re egomaniac with delusions of grandeur. And dear god, what are you doing to this sea sponge, you fucking lunatic?”