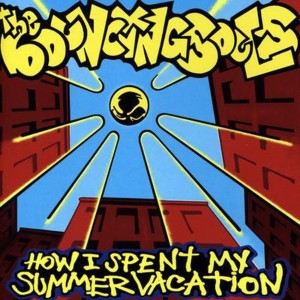 In “Seeking a Friend for the End of the World” with impending doom, Keira Knightly’s character grabs several records before fleeing her home with the hopes of listening to them one last time. The Essentials is an ongoing series about the ten, in no particular order, albums I would grab in such a similar situation.

I heard someone say nothing gold can stay. When I first considered “The Essentials,” the Bouncing Souls The Gold Record was one of the first ones I put on my list. It is a great record, and was super important at a crucial time in my life. But you expected as much since that theme has been running through The Essentials. The thing about the Bouncing Souls is they create a vast amount of songs that go directly to my heart. And they spread those songs nicely across all their albums. While I still love The Gold Record, I mean I did name this site for a song from that album, lately I can’t get enough of Anchors Aweigh. However, you’ll notice the title up there reads, “How I Spent My Summer Vacation.” Because ultimately that is the album from The Bouncing Souls I would want to hear last.

It was the Warped Tour of 1999 when I first became of fan of The Bouncing Souls. Hopeless Romantic released a few months before, but I didn’t pick it until after. I listened to it a bunch. But it was the release of How I Spent My Summer Vacation that I really fell in love with the Souls. From the opening line, “I put that record on just to make a sound,” I knew this band was what I wanted in my ear.

Then it continued, “I like to rock and I love to roll. When the music’s running through my soul. I’ve got no place to go, but my own private radio.” Punk rock was picking up attention, but it still felt like this thing where outcast could go to feel a part of something. This song, and this album. celebrate that. And it has always made me feel like I would be friends with these guys if I ever had the opportunity.

On the site I used to write for we would have these weekly hypothetical questions and one was, “Excluding significant others, friends, and family, who are the three people you would like to be stranded on a deserted island with?” One of the people I chose was Greg Attonito, the Souls singer and lyricist (the others were Mike Birbiglia and Alyson Hannigan, but that’s not relevant to this). I chose Greg because I wanted a musician around and because he writes these great songs about friendship so I assumed he and I would become fast friends on our empty island.

I shared this because it brings up another reason Vacation beat out the other excellent Souls albums. There are several songs on this record that remind me of my friends. As we get older, we get caught up in families and work and whatever else, and we drift apart. It’s how it goes. So I love when I can play a song and be flooded with all the great memories of my favorite people.

“True Believers” specifically talks about all the people who come into our lives. “Manthem” is that ode to your closest boys. The dudes who will mock you for watching Fuller House while watching it with you. “It’s a bond that will never die, until the end of time.”

“The Something Special” is a song that will always remind me a friend who was once one of my nearest and dearest, but we have been drifting apart for some time now. It sucks, and the song makes me sad. Yet at the same time it serves as a connection that will forever be. It’s what Butters would call a beautiful sadness.

Something the Bouncing Souls do is end their albums with a somewhat slower and quieter song. It feels weird to say this, but I would describe these songs as pretty. But they still have the punk vibe. It’s like they wrote an acoustic song but played it with real instruments. The one on Vacation is “Gone,” and it is one of my all-time favorite Bouncing Souls songs. If this was Seeking a Friend for the End of the World this is the song I would want playing in those last minutes.

How I spent My Summer Vacation is a punk ode to the importance of music and friendship. It’s part of my essentials collection because I want to always be able to put the needle on the record, and play that song again.