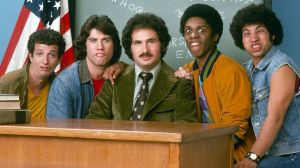 For those of you who followed me from my old site, Cru Jones Society, then you already know what this is all about. For my new found readers, this was something we would do every week. In an effort to help whittle away those useless Friday work hours (seriously what’s the point of going to work on Fridays?) we gather up some links from around the web that are interesting, funny, or just plain wacky. In a recent chat with my former website partner, E Dagger, we reminisced how much fun we had writing these, and in my new attempt to not sit on my creativity I thought I would revive the art form that is Happy Friday. I have fun writing them and you get to waste the morning, the only loser is your productivity, and your boss I suppose. So let’s get to the wrestling, Chuck Taylors, and hockey!

This feels like I’m stepping up to bat. And like any good hitter, or really any hitter, there’s the ever important plate routine. Maybe you remember Nomar Garciaparra incessantly adjusting and readjusting the Velcro on his batting gloves. He has nothing on this Japanese high schooler.The gif is nice, but you have to watch the whole video and see every goofy thing this kid does. I love Japan and I hope they never change their ways.

Have you ever been 98 years old and set in your ways then just thought, “maybe it’s time to try something new?” If so then you have much in common with Chuck Taylor, the shoe, not the dude. Well, maybe the dude, I don’t know his life. But the classic shoe has been the same for 98 years and now they are about to try something new. The shoe’s classic and familiar look will stay the same, so calm down. It’s the interior getting the face lift. Adding more cushioning. I just recently bought my first pair of Chucks and I can say the main thing holding me back was the lack of support they offered my larger self. So I’m all for their upgrade. And if you’re not, you can still buy classic un-cushioned Chucks and continue to live in fear of change.

Europeans think America’s love of air conditioning is stupid. But we can’t hear them over the cool, delightful hum of the AC units.

Because we would write a Happy Friday every week, I developed a habit that was hard to break of sending myself links to use. So what follows are a few dated pieces, but are still fun or have at least some relevance, or I just want to empty them from the folder they reside in.

Remember when Gangnam Style was the sound de jour? That nutty South Korean had us all dancing around like idiot goofballs. But my favorite use of the song was this mash-up with the Ghostbusters Theme. It works surprisingly well and with the upcoming Ghostbusters, uh reboot?, I say it fits like a proton pack.

While this article is three years old and makes reference to a 35th anniversary which would be out of date, everything else the article says still rings true. If you need a reason other than it’s awesome, it’s funny, and it’s about hockey to like the movie Slap Shot maybe Will Leitch explaining why it’s the only honest sports movie will help. He nails exactly how Slap Shot is able to depict exactly what sports are. If you love the movie then this is great. If you haven’t seen the movie, stop reading this and go watch it. If you don’t like the movie then stop reading and just go, just go away, and feel shame.

How about a silliness break? Fire it up, and be sure you have the sound on.

If I had to choose three people to consider my creative inspirations they would be Jim Henson, Dr. Seuss, and Bill Watterson. I have spent large chunks of my life consuming all I could from and about these three men, and as such they have had quite the impact on my life. Here are a few things pertaining to each of them. First, an interview with the elusive Bill Watterson. Then let’s have a moment of sadness with this Muppet tribute to the late Jim Henson. Always end on the high note, so here’s 10 quotes about Dr. Seuss’ work, and to all my friends with kids, the first quote is where we stand.

Most people have hobbies like golf, or stamp collecting, or model building. For the life of me I have never met anyone who collects stamps. Is this actually a thing or just some old sitcom trope? That’s not the point here. When talking about hobbies, one that doesn’t often come up is gaming airlines to fly around the world for free. That is a thing people do, and some people, like Ben Schlappig, are really good at it. It sounds crazy and also awesome. This is definitely a must read. The only thing that doesn’t appeal to me is the amount of time spent in airports. Guess I’ll just stick to my hobby of sorting Legos by shape and color.

While we’re on the subject of travel (still a master of the segue!) I recently received a comment from someone I didn’t know, the Sketchpacker. Before I approved her comment I looked into her blog, I already have some sketchy folks around here, I have to be careful. The Sketchpacker travels the world and shows us what she sees through sketches. As a supporter of artistic endeavors and travel I fully endorse her blog. Check out her awesome drawings, read about the places she’s been, and get some tips about traveling on a budget. Anyone with a phone can show you the world with pictures, but it’s something special to see it drawn.

The next link is scheduled for one fall. Making its way to the ring from YouTube Channel UpTooMyKnees, Wrestling Isn’t Wrestling! If you understood what was going on with that intro then you will get a kick out of this video. If you’re not into wrestling you should watch the video to become more enlightened as to why we watch wrestling even though “it is fake.” Still need some convincing to watch? Seth Green, Macaulay Culkin, the Myth Busters, and all sorts of eye candy are in the video. It was made by John Landis’ son Max. Just watch it already!

Zen Pencils is a website of “cartoon quotes of inspirational folks.” I read it often when I feel a need for some motivation, and I am never let down. Every so often the latest comic seems fit a little too well. I pulled it up today to find the newest comic is exactly what I needed to read in my life right now.

I think that is a great place to end. Happy Friday would always close with a demotivational poster. But I am tired of looking through all those to find ones that aren’t terrible (which is most of them), and in a recent search I found the front page to be filled far too many sexist ones. But I like the notion of ending with something ridiculous, so I have opted for bad tattoos. Either something just awful, too damn funny, or puzzling as to why someone put that on themselves. So here’s your Terrible Tattoo for the week. 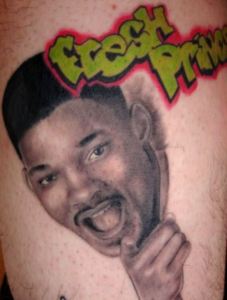