There’s a new, I guess we’ll call it a game, going around on Facebook where you list 10 albums from your teenage years. Because I can’t just make a list about music that is important to me without yammering on, I have brought it here to add more information about my experience with each album. For most of the years before becoming a teenager, my music was influenced by what my older cousin told me I should listen to. Which was a bunch of gansta rap then heavy metal. But during the teen years I saw him less and discovered punk rock. So this list is comprised almost entirely of punk rock, but there is one ska album and  of albums, just to cover all the bases. I’ve also decided to put these in kind of a chronological order.

I had this on tape and vividly remembering listening to it every day as I walked home from middle school. With pop hits like, “Here in Your Bedroom,” and “Mable,” mixed with harder, angrier tracks like, “The City With Two Faces,” it was a great segue record.

“…And Out Come The Wolves,” Rancid

I’ve talked about this record on here before. It was given to me as a birthday present from one of my skater friends in 7th grade. It was in the vein of Green Day and the Offspring, but with the mohawks, leather, and spikes, it felt more dangerous and rebellious and was the beginning of the end to my full embrace of punk rock. Or rather embraces with a warm gesture, it was time, time to say good-bye to the other music.

I had these three friends in middle school, Dylan, Jordan, and Keith, who started a band and managed to get a tape made. The name of the group was the Ginders. I’m still not sure what that means or where the name came from. But that tape contains a cover of Operation Ivy’s “Knowledge.” It was my first taste of band people would tell to check out because I liked Rancid.

This album was everything in the 9th grade. Like some kind of punk rock bible. All my skater friends had it and listened to it religiously. I had a taped version with the songs all out-of-order. I suppose that was my start to making mixes. At the beginning of the tape were the bands I knew, Rancid, Nofx, Pennywise. And in art class, my pal, who we called Matt Y Cool Guy, and I would take turns listening and would keep rewinding back to hear the Rancid and Pennywise songs.

That Pennywise song on “Punk-O-Rama, Vol 2” was “Perfect People” which led me to the record it came from. Despite breaking my ankle the year before skateboarding and giving up the sport because I was, or am, an uncoordinated doof, I still fully embraced the skate punk scene and Pennywise was the soundtrack to that, at least in my little suburban area.

No 90’s punk starter kit was complete without some Nofx. My kit contained “Punk In Drublic.” I was in love with the song, “The Brews.” It wouldn’t be until years later when I realized this song was about being a badass Jew. I didn’t know a lot (read: any) Jewish people until I was like 20. This was another album I had on tape and would listen to on my Walkman when I mowed the lawn, but only to side A. I would immediately rewind it and start over after “The Brews” ended. This was no easy feat either as it meant having to stop and restart the mower. A testament to how much I disliked side B.

The Fat Wreck Chords comps were extremely vital to my teenage years. I could have easily filled 5 spots on this list with volumes 2 through 6. I opted to go with Vol 3 because I have vivid memories of falling in love with the Swingin’ Utters, No Use For a Name, Nofx, and Strung Out songs. This was also one I listened to frequently on my walks to school, only I had now upgraded from the Walkman to the Discman.

“Do or Die,” Dropkick Murphys

Compilations were all the rage in 90’s punk rock and I picked up “Give ‘Em the Boot” because it had a Rancid song I was unfamiliar with. But while listening to the album I came upon a gem. It started with a bagpipe and the line, “Face down in the gutter, won’t admit defeat.” Then it kicks the door in and there are chants of “hey, hey, hey.” I wanted more of this Irish influenced street punk sound. I obviously wasn’t alone in this thought as this band has since exploded, though the lineup now only contains one member who was there on that comp. I also chose this as a teenage album because I got the privilege to see these guys in one of the smaller, more intimate venues in Denver, the Bluebird, and it just happened to be the night of Columbine. My teenage experience involved a mass shooting in my school district. Could be some insight to why I turn to music in times of tragedy. I’m getting off track.

Any talk of my teenage years would not be complete without mentioning the Warped Tour. And one of my fondest memories was seeing the Souls play Warped right after Hopeless Romantic dropped. I picked up the record after that performance and it has had constant rotation ever since. The Bouncing Souls have always had these great songs about friendships, and my closest friends are ones I made in high school. Coincidence? I mean probably, most of life is coincidence. But it’s still an interesting connection.

In high school I was, as Mr. Burns would say, “keen on Jesus.” And luckily for me, this was also a time when God ska was a thing. There was a pretty good-sized scene of Christian ska bands. The 90’s were a weird time. Five Iron was part of that scene, and they were from Denver! I recently started listening to some of these God ska bands again, and even though I stopped believing in any of that years ago, I still find this music pretty good. Part of it is that George Costanza idea of it being so positive, but it’s more that these people are singing about something they have such a passion in. I can’t fault anyone for that.

Those are my 1o Teenage Albums. A nice trip down memory lane through the magic of music. I’m always a fan of that. 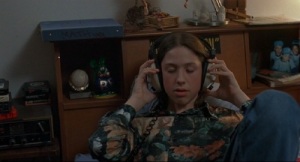